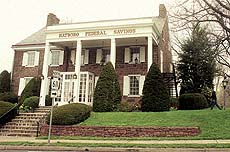 Hatboro Federal has been committed to its customers and the communities it serves for more than seven decades.

Hatboro Federal was chartered by the Federal Home Loan Bank Board on February 3, 1941, with $25,000 in assets—the minimum financial requirement at the time.

We issued our first home mortgage loan two months later—on April 17, 1941—in the amount of $4,500 for a home purchased in Hatboro.

Our continued growth and success motivated us to expand into nearby communities. Our Warminster office—a new structure at 609 York Road—opened on March 17, 1960. Our Warrington branch at Bristol and Easton Roads opened in the historic 1799 John Barclay House on April 9, 1964.

An extensive addition was built onto our main office in Hatboro and completed in 1978. When we realized we could not salvage the neighboring historic Potts House we acquired at 229 South York Road, Hatboro Federal undertook an historic replication that was completed in 2000. It now houses our loan department.

From time to time, we provide links to other websites for the use of our visitors, which have been compiled from internal and external sources. By clicking “Continue” below, you will be opening a new browser window and leaving our website. Although we have reviewed the website prior to creating the link, we are not responsible for the content of the sites.

Information on linked website pages may become dated or change without notice, and we do not represent or warrant that information contained on these linked pages are complete or accurate. We suggest that you always verify information obtained from linked websites before you act upon such information.

The privacy policy of this bank does not apply to the website you visit. We suggest that you always verify information obtained from linked websites before you act upon such information.